Original pictures of how car looked on Ebay.

This story begins in Nov. of 2011. I was looking forward to retiring soon after I turned 62, in Dec. I was working as a motorcoach mechanic and the job was physically demanding and getting harder to do each year. I felt I needed something to do instead of sitting on the couch and watching TV all day. Since, I’m not “that guy” and being a lifelong old car enthusiast and general “gearhead” there was only one choice, restore an old car. I set about surveying E-Bay each day for a car I liked and could afford. One day I saw a listing for a ’63 Olds 88, minus it’s engine and transmission. The opening bid was $300. I wanted to bid on it but, being the good husband that I am, I ran it past the wife first. She was opposed, and said that restoring an old car was “stupid” and “a waste of money”. Since then, as I approach the halfway point of my restoration, she has changed her mind. She has seen the work I have done, and is proud of me for doing “a good job”.
I finally prevailed. But, when I went to E-Bay to bid on the car, it was gone. I had saved the listing, and was able to contact the seller in Albuquerque. He told me that someone had offered him $ 300 for the bumpers. So, he sold them and was going to “part out” the rest of the car. I told him, “It’s too bad to scrap a nice rust free car, how much would you take for the rest of the car”? He said “$500”. I said, “I’ll send you a check and arrange transport”. Now, the tricky part was the transport. I didn’t have any experience with auto transport and it was kind of an ” eeney , meeney , miney , moe ” kind of deal, and I picked the wrong one. I picked a company out of Miami, (should have known better) and it took three months to deliver it. I finally got the car in Jan. 2012. The seller had started to strip off the parts for sale, but most of the parts including the headlights, grille, and tail lights were all in the trunk. 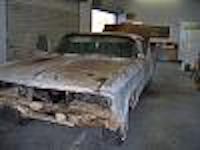 How the car was received from seller, after he had started to strip parts off the car.